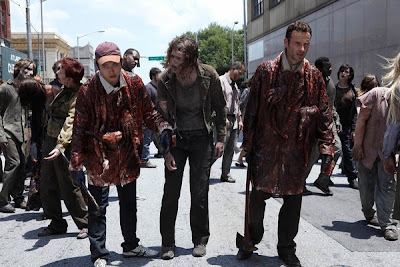 Gamers and zombie fans alike get ready for some good news. The Walking Dead looks to be making the jump to video games.  This makes perfect sense since the graphic novel turned hit AMC show has a growing fan base.

It has been reported that Telltale Games (proders of games like Back to the Future, Jurassic Park and Wallace & Gromit) are going to be making some major product announcements, including:

“one based on a just-launched property from the TV and comic book world whose popularity is changing life as some know it.”

The only show that comes to mind is The Walking Dead. There are tons of zombie related games available so hopefully a Walking Dead game will be unique and have a great story that gamers can follow instead of running around and killing zombies (Dead Rising). It would be cool if they could use some of the facial animation features put into place with L.A. Noire recently by RockStar Games. The costs are a bit prohibitive, but one can hope.
What are your thoughts of the possibility of a Walking Dead video game?