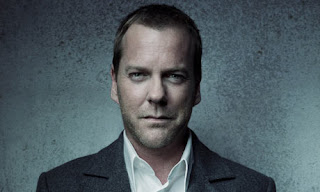 Kiefer Sutherland gives an update about the 24 movie currently in the works!

When 24 came to an end on the small screen it was a foregone conclusion that a big screen version would make it’s way to eager fans. Earlier we reported that the initial script by Billy Ray was rejected, causing fans to question if the movie was still a go. According to Kiefer Sutherland, the script is actively being worked on. Sutherland is hopeful that the film will be shooting by this time next year.


Sutherland did an interview with Extra where he stated that “we won’t start shooting for about eight months.”


Here is what Sutherland said about the changes to the script,

And I think it will up until the day we start shooting, and probably from that point forward, too. It’s a very difficult thing to take something that you’ve done for eight years, almost 200 episodes, and try and find a story that’s going to be unique and yet service the history of the show as well. That is to be expected. So we start shooting hopefully by next December or January.

While that is not a confirmation that the film is happening, it is a status update that seems promising. The script is currently underway, but I would not hold those two date ranges Sutherland mentions as definite start dates. Tony Scott has been rumored to be involved in the film, but he is not mentioned in the interview so there is not an update at the moment.