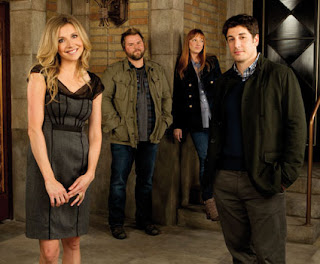 Earlier this week I had the chance to participate in a Q&A with Jason Biggs and Sarah Chalke for their new series Mad Love, which premieres Valentines Day February 14 at 8:30 ET/PT on CBS.
Show Synopsis:

MAD LOVE is a comedy about a quartet of New Yorkers—two who are falling in love and another two who despise each other (at least for now). Ben (Jason Biggs), a lawyer, is a hopeless romantic trying to build a relationship with Kate (Sarah Chalke), a beautiful, smart girl whom Ben thinks is the woman of his dreams. Larry (Tyler Labine), Ben’s unrefined best friend and co-worker, is a guy who doesn’t believe in love and has a long track record as the third wheel. Kate’s roommate, Connie (Judy Greer), works as a nanny and finds Larry aggravating…or does she? Larry and Connie have a lot in common, but refuse to let their guard down long enough to see it.

When asked about the auditioning process and how they got their roles in the series, they responded by saying:
Biggs:

“I did – I’ve met with Matt — Matt Tarses, the creator of the show, and his sister Jamie, the Executive Producer of the show a long time ago when it was sort of we did one incarnation of the show. And then it sort of became something else and everyone, myself included, wanted Sarah Chalke so badly to play the part of Kate. And we begged and begged and begged. And I even went – and I went and begged because I so badly wanted to work with her.”

“I was so excited to do it. I mean I know Matt for a decade. He wrote on Scrubs and I just, I love his writing so much. You know, he’s so funny. He’s such a unique and creative, fun sense of humor and then also I think put so much heart into the shows he really cared about the characters. And so when it was the combination of him – I know Jamie Tarses for a long time too. And then when I found out Jason was doing it, Jason and I crossed path maybe four years ago and met very, very briefly. We did the same play in New York City.”

There have been so many great shows dealing revolving around couples, but what sets this show apart from other shows on now and in the past?

“Well for one, this is the only show that we are on. So……I think, you know, I like to think, you know, what I love so much about this show is that it’s – I think it’s incredibly funny, but it’s also got – it’s just a lot of heart. And I think, you know, I think with sitcoms, you know, inherently, you tend to, you know, you tend to explore some things that are a bit heightened and kind of, you know, you kind of, you know, for the sake of comedy, you know, tend to get broad sometimes. But I feel like, so far, we have explored story lines and ideas that are pretty grounded in realty, you know; very – so far, we’re kind of exploring sort of early relationship stuff. And it’s all been very relatable certainly to me. I mean I get it and it’s been fun to play for me. And I don’t know; I just feel like the show has a lot of heart.

And also, I can’t speak enough about the chemistry that this cast has. I just, I feel it every day coming to work. We all get along so well on a personal level and then professionally, it’s – I mean everyone is a consummate professional, but also we’ve already in such a short time come to learn each other’s rhythm and timing. And we have such similar comedic sensibilities and it just kind of works so brilliantly that I can’t help but think it’s translating to the screen in a way that is unique and doesn’t happen that often.”

I enjoyed Biggs in the American Pie films and grew up watching Chalke in Roseanne. They had just as good comedic timing during the phone call. Here is their response when asked if comedic timing comes natural to them or if it was something they had to learn over time?
Chalke:

“I feel like it was kind of a learn-on-the-job type thing for me. And I feel lucky, I got to, you know, start working with – actually our director this week, Gail Mancuso directed me for years on Roseanne. And that’s kind of where I was just sit there in awe at 16, not really haven’t done anything, watching Roseanne and John Goodman and Laurie Metcalf on like what they would do with the script from a Monday until, you know, Thursday tape night.

And it was just a lucky experience to get to watch such talented people that I respected so much. And – but I at that point felt much more of an observer in a sense than a participator because I was so young and I was so new and a combination of, you know, excited but also very nervous and scared. So – but yes, I thought that was, you know, it was a great learning experience.”

“…timing is I think the most important component to good comedy. And I don’t think it’s something you can learn. I believe it’s something that you kind of, you know, have or don’t have. However, I do believe you can hone it and improve upon it and kind of play with it and learn how to sort of, you know, play with it and use it, but not necessarily start from scratch with it.

And Chalke’s just got it. I mean she’s like – she’s just got it, dude. It’s like insane. Yesterday she was doing the stuff; it was literally Lucille Ball. I was watching Lucy do this like physical comedy craziness. That’s the other, I think, important part of comedy, at least the kind of the comedy that I like is the physical side of it.”

Mad Love marks the first TV series (aside from some guest roles) that Jason Biggs has been in. Here is what Biggs had to say about his switch to TV and how Chalke has been able to help him.
Biggs:

“I’ve been looking to do TV for quite a bit. The idea of getting to come in and, you know, kind of not necessarily – I mean, again, we don’t know because we don’t know this – how long the show is going to go — hopefully forever. But the idea of kind of not having an exact endpoint necessarily and having a chance to kind of explore storylines and characters, you know, and sort of grow with them is very appealing, you know, sort of, you know, unlike a movie. And also just on a personal level, to sort of – I mean and now especially this cast is so incredible and I have so much fun coming to work that like if this is a movie set – well as it is now, we, you know, we’re coming upon the end of our season here and it’s already getting quite sad. But like I said, hopefully, we’ll get a chance to do it again.So – but, no, I – and also I just, I love comedy.

And I – the chance to do it week in and week out is just far too appealing for me. It was – and Matt and Jamie, they’re the creators of the show — well Matt created it and Jamie produces it — the opportunity to work with them, I love this idea, I love this character and it was just too much to pass up.”

“And for me, I love the idea of, you know, getting to be with the same group of people and find out, you know, every episode for as long as it goes, finding out new stuff about your character and then – you know, last week, I found out Kate was from a farm and then the next day she’s like ridiculously clumsy. And in terms of the whole group, I mean Tyler has done a bunch of TV too, but whether – you know, no matter what format it’s in, you know, it doesn’t matter, like this is just such a fun, funny group.

…I’m learning from all of them too. Like every day, we just – it’s a very collaborative environment and Matt has really set the tone for that. And, you know, we do exactly as it is written on the page and then we can – once we’ve got that, we can try something fun. And I think that, you know, that when you really have a good time together, that makes a difference. And hopefully that comes across. But yes, I think we really, you know, have been just all learning from each other and having a good time.”

The phone conversation was a lot of fun, it’s clear that the entire cast are having a lot of fun. Makes you wonder what it’s like on the set. Here is Biggs’ response:

“It’s – oh my God, it’s so – it’s incredible. It’s – I’d tell you what, it’s pretty difficult to keep a straight face around this group. Not only because when they’re performing, they are – I mean it’s such a talented group. I’m speaking about the three of them. They are so talented and so funny and they know – they’re so smart with comedy and they hit every beat and moment perfectly. So that’s – it’s hard to keep a straight face.

But also they’re very funny people without the – off the set. And we kind of all now know what buttons to push to get either under the other person’s skin in a comedic way or…”

That’s such a good question. I don’t know if there’s any one specific person. I definitely feel influenced by people in my life and in my career and in my work. I mean I have such huge respect for many different actors that I find, you know, when you watch them, it just kind of makes you want to go to work and do a great job.

And Lisa Kudrow is definitely one of those people for me. I – we – Judy and I quote Valerie Cherish on pretty much a daily basis here.

Kudrow is a good one for you. That’s actually a good one. I was saying yesterday, Chalke had this moment where she was literally Lucille Ball. It was insane because her physical comedy is off the charts.

Yes, I don’t know that I’m trying to model, you know. And I think for this entire cast, I mean I think part of the thing that’s so great about this cast is we all kind of bring something unique to the table individually, and yet collectively, there as a group, we gel and have such a great sort of chemistry and connection that – and like our rhythm becomes – it just kind of meld so perfectly.

Be sure to watch the series premiere of MAD LOVE begins on Monday, February 14, 2011 at 8:30 PM ET/PT on CBS. Stay up to date on the show by following them on Twitter and Facebook.