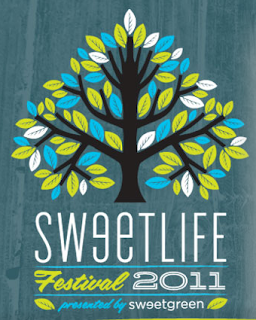 The Strokes have been announced as the headliners for the Sweetlife Festival! Sweetgreen is known as being the creators of sustainable eateries. They also have announced they will be partnering with Jamie Oliver Food Foundation. Keep reading for more information!Here is the official press release:

Washington – February 28, 2011 – sweetgreen (www.sweetgreen.com), known for its network of sustainable eateries throughout the northeast, is bringing the Sweetlife back to the Capital region this summer, and announced today that The Strokes will headline the annual Sweetlife Festival. The festival is scheduled for Saturday, April 30th at Merriweather Post Pavilion in Columbia, MD. Head over to www.Sweetlifefestival.comnow to sign up to receive pre-sale notification and additional band announcements in the days to come.

In addition to presenting a day of renowned musical talent, sweetgreen will work with partners including Honest Tea, Stonyfield Farm, and Applegate Farms to curate experiences around the festival grounds that extend sweetgreen’s hip and eco-conscious ethos from the table to all facets of the Sweetlife. Sweetgreen is also working with local energy partners to make every effort to ensure the festival has no carbon footprint, including an interactive exhibit at the festival that channels human energy. Unlike traditional music festivals, at the Sweetlife Festival fans will also have the opportunity to purchase not only traditional concessions and sweetgreen product, but they will also be able to visit an on-site farmers market, featuring produce and snacks from the region’s local growers.

The Strokes’ headlining announcement supports the band’s forthcoming studio albumAngles. Recently released for pre-order, the album is the band’s first in more than five years. Sweetlife Festival is one of a handful of appearances the band is scheduled to make in 2011, and the only in the mid-Atlantic region.

Sweetlife Festival is an annual celebration of music, wholesome food, and thoughtful living, hosted by sweetgreen and located directly between Washington DC and Baltimore where fans of music and sustainability can experience the forefront of both cultural movements in one interactive environment. As an extension of the brand’s commitment to sourcing seasonal, local food for each of its locations in Washington and Philadelphia and promoting healthy, sustainable living, sweetgreen is partnering with the Jamie OliverFood Foundation, which was established to fight obesity and promote better dietary health through food education and cooking skills. A portion of the festival’s proceeds will be donated to the celebrity chef?s foundation.

Known throughout the Beltway for its eco-friendly eateries that feature locally sourced ingredients, wholesome and flavorful food and sustainable business practices, sweetgreen is changing the way America thinks about quick eats. The Sweetlife is a lifestyle extension of the brand that allows it to identify with the people who embody its core principles, educating customers while rewarding them living the “Sweetlife”. TheSweetlife Festival brings all of the ingredients to a healthy lifestyle together in one event.

“This festival is bringing us one step closer to realizing our vision for the ‘sweetlife’,” said Jonathan Neman, co-founder of sweetgreen with Nathaniel Ru and Nicolas Jammet. “We’re excited to bring an event like this to Washington DC, and to bring together two of the most important aspects of the sweetlife: sustainable food and live music. This year’sSweetlife Festival is a huge leap from last year–from the days DJing block parties in the parking lot of our Dupont Circle sweetgreen location to now being at one of the most legendary venues in the country, not to mention with one of our favorite bands of all time.”

The Strokes to begin working on Angles follow up in April