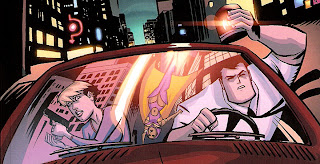 FX has placed a pilot order for a new drama titled, Powers based on the graphic novel by Brian Michael Bendis and Michael Avon Oeming. The pilot is being written by Charles H. Eglee and will be directed by Michael Dinner. With the success of AMC’s The Walking Dead it only makes sense that more graphic novels are being adapted.

The show is a “police procedural set in a world where superpowers are relatively common and centers on two detectives, Christian Walker and Deena Pilgrim, in a Homicide department that deals with cases involving “powers” (people with superpowers).” Production is expected to begin on Powers, from Sony Pictures TV and FX Prods. this spring.

Dinnery currently has an overall deal at Sony and is the driving force between the project. Eglee was brought on to write a new script late last year, after he worked on AMC’s The Walking Dead. Kevin Falls (Journeyman) was previously tapped to write the script. Circle of Confusion, the company behing Walking Dead, is attached to executive produce alongside Dinner and Eglee.

The Walking Dead is an amazing show and it only makes sense to bring on people that have experience adapting graphic novels. What are your thoughts on this news?