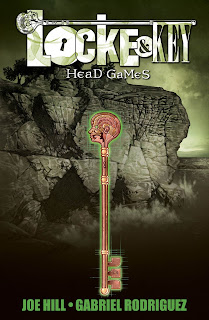 Joe Hill & Gabriel Rodriguez, the creators of the Locke & Key comic series, revealed some new details with MTV in a recent interview.

Here is what they had to say after visiting the show’s set of Locke & Key:

“All we did was laugh for three days straight. Everyone who has ever had a story adapted to film says the same damn clichés, but they’re true. It was surreal and wonderful and exciting. These incredibly talented artists and craftsmen built a basement right out of “Welcome to Lovecraft,” down to the beams and ropes and look of the staircases. You just can’t underrate how bizarre it is, to work on a comic for three years, and then one day step into a setting lifted right from one of the panels. I don’t know that we played it very cool, but we sure had fun.”

“[It was] one of the most exciting, fun, and certainly the most surreal experiences of my entire life. You can’t imagine how weird it all was for me, but also great to share it with Joe and my friends from IDW Publishing. And it was overwhelming; it’s an amazing crew working together as one fantastic orchestra. Can’t wait to see it when it’s finished…”

Here is their response when MTV asked them if the show would do a good job of representing the comics:

“Yeah. They get it. For me, that was my favorite part of visiting the set. The bunch of them — Miranda Otto, Nick Stahl, Jesse [McCartney], Sarah [Bolger], and Skylar [Gaertner] — have great chemistry. They have it even when the cameras aren’t rolling. They listen to each other. They attend.”

“They’re not a collection of single characters, they’re an ensemble cast. They are “The Lockes.” They get it, and in a big way.”

Here is what they had to say about the casting of Jesse McMartney:

“Yeah, initially I had my doubts, not knowing anything about him except that he had a music career. My concern only lasted until I saw him work, though. I watched him perform a couple scenes and was not just impressed, but kind of rattled by how well he brings off Tyler. Jesse has depth and gravity and a kind of sweet, bruised innocence that really captures what I was after in the character.

With the camera off, he’s an un-showy, hard-working kid who wants to do the right thing — which is also kind of like Tyler. He’s got a little of that Mark Wahlberg thing going — who was also a pop recording artist once. I think we’re lucky to have him. And one other thing: there’s this rumor going around that somehow the part has been rewritten to make music a major aspect of the show. That’s your basic internet nonsense, right there. Tyler isn’t going to have a dance-off with Sam Lesser. It’s a horror show.”

“Well, I certainly had a different approach to this subject, as all I knew about Jesse when he was announced in the cast, was his guest appearance in an episode of “Law & Order: SVU.” I saw that episode, in which he had a very intense role, so I know the guy can perform. And seeing him acting on our set visit was almost disturbing. The guy is Tyler. He can embrace the awkward mix of being strong and fragile at the same time. He’s very much into who the character is, and really focused on doing his best.”

Locke & Key hits TVs this Fall on FOX. What are your thoughts on this news? Are you looking forward to watching this series?