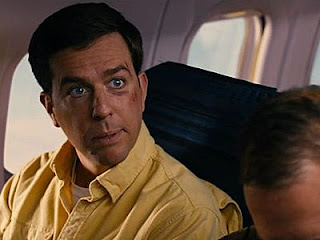 Looks like there will not be a Bill Clinton cameo after all in The Hangover 2!

We posted some photos of Bill Clinton on The Hangover 2 set which prompted reports of a Clinton Cameo in the film. Here is what the actor had to say to MTV at Sundance while doing press for his filmCedar Rapids:

“Check your sources. He came and visited us, but I’d be surprised if there’s [a scene in the movie].”

Here is a video of Helms’ response:

Helms’ response is a very interesting one. Because how often does Bill Clinton go around visiting sets, especially in foreign countries where it’s a logistics nightmare to travel with his security detail?
Cameo or not, The Hangover 2 is my most anticipated comedy this year aside form Helms’ Cedar Rapids. The film reunites Helms with Bradley Cooper, Zach Galifianakis and Justin Bartha. Liam Neeson, Mike Tyson and Paul Giamatti are also along for the ride. A teaser trailer is likely arriving soon with the film set for release on May 26th.

What are your thoughts?

THE KING'S SPEECH Being Re-Edited & Headed For More Theaters!