THE KING’S SPEECH Being Re-Edited & Headed For More Theaters! 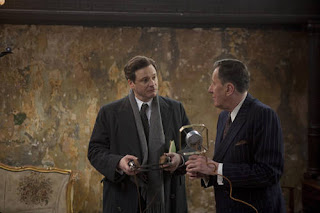 In hopes to make The King’s Speech more marketable to the general audiences it is set to be re-cut with a new version hitting theaters after the Oscars.

Harvey Weinstein is currently discussing the idea with director Tom Hooper as part of a new marketing strategy to broaden the films appeal. The new version will most likely not be unveiled until after the Oscar broadcast on Feb. 27.
In the UK, the film has a 12 and over rating and has topped the box office for three consecutive weekends.  Weinstein had the following to say about the films success in Great Britain:

“The British numbers are huge because the rating lets families see the movie together. Tom and I are trying to find a unique way to do this that keeps his vision of the movie.”

A portion of the new marketing strategy begins this weekend with the expansion to 2,500 theaters domestically, up from 1,680. The ads are also being redesigned to focus on the film’s theme of friendship rather than relying mostly on positive blurbs. Weinstein said,

“The message more was about the critics, but now we’re trying to get across that this classic movie is just as cool as the other movies people are seeing.”

I am all for expanding the number of theaters and redesigning the ad campaign, but I think its a horrible idea to re-edit a film. It is one of the best movie going experiences of the year. My wife and I left the theater feeling inspired and motivated about life in general. I worry that editing the film will detract from the story and hurt the overall feel of the film.
The King’s Speech does not even deserve the R-rating it has. This brings me to another point that has to be said when films like Blue Valentine get an NC-17 rating initially. America needs to loosen up, it is crazy to think that MTV’s Skins is receiving so much flack as of late when the UK version is far grittier.
No matter what, The King’s Speech is a beautifully shot film that tells a wonderful story.  It is my pick for Best Picture this year and I have a strong feeling it will win. What are your thoughts of this news?


Check out my interview with Gareth Unwin, one of producers of The King’s Speech HERE

THE KING’S SPEECH Being Re-Edited & Headed For More Theaters!