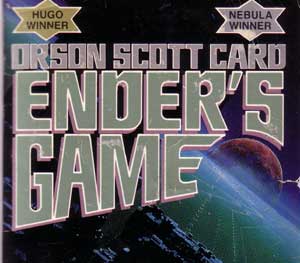 Roberto Orci and Alex Kurtzman are set to produce a feature film adaptation of Orson Scott Card‘s  Ender’s Game with a screenplay to be written by Gavin Hood.

I remember reading Ender’s Game and being blown away. It was one of those books that I started reading and just couldn’t put down. Card’s novel is set in a world where humanity is losing in war with a formidable alien race, and where children are trained from a young age to be members of the military. “Ender” is the nickname of one of these kids, and the novel tells of his training. This is the first book in the series which takes us into the heart of the war and. The film adaptation could likely contain more than just the first novel’s worth of storyline.

Gavin Hood as you may remember, directed X-Men Origins: Wolverine. The film received a lot of flack from fans of the series (in my opinion a little too much).  Kurtzman and Orci the writers of Tranformers, Mission Impossible III , Star Trek and Cowboys & Aliens will be producing the film. Everything seems to be headed in a good direction because Bob Orci tweeted the following message last nigh:

Ender’s Game! Us(K/O), Oddlot, and Gavin Hood taking his amazing script to the town! Who wants some?

Soon we can expect to hear news of which studio has the picked the project up. I thought the book would make a great film when I read it. This project has been in development for a while, but has yet to be made.
What are your thoughts of this news?
Here is a description of the book:
In order to develop a secure defense against a hostile alien race’s next attack, government agencies breed child geniuses and train them as soldiers. A brilliant young boy, Andrew “Ender” Wiggin lives with his kind but distant parents, his sadistic brother Peter, and the person he loves more than anyone else, his sister Valentine. Peter and Valentine were candidates for the soldier-training program but didn’t make the cut-young Ender is the Wiggin drafted to the orbiting Battle School for rigorous military training.
Ender’s skills make him a leader in school and respected in the Battle Room, where children play at mock battles in zero gravity. Yet growing up in an artificial community of young soldiers Ender suffers greatly from isolation, rivalry from his peers, pressure from the adult teachers, and an unsettling fear of the alien invaders. His psychological battles include loneliness, fear that he is becoming like the cruel brother he remembers, and fanning the flames of devotion to his beloved sister.
Is Ender the general Earth needs? But Ender is not the only result of the genetic experiments. The war with the Buggers has been raging for a hundred years, and the quest for the perfect general has been underway for almost as long. Ender’s two older siblings are every bit as unusual as he is, but in very different ways. Between the three of them lie the abilities to remake a world. If, that is, the world survives.
Source: Roberto Orci’s Twitter