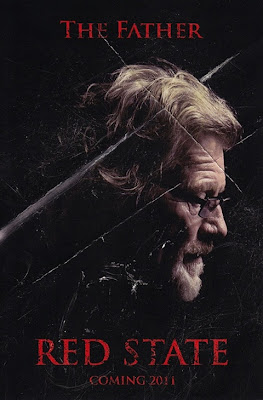 Are you willing to pay $50 – $100 to see a movie? Kevin Smith is hoping his fans will and announced after the premiere of Red State at Sundance that he plans on taking his film on the road.

He hopes to make back the budget of Red State on his own by taking the film on tour making that profit from fans one city at a time. Smith and the Michael Parks will be there for post-film Q&As at each location.
According to Smith, fans will likely have to pay “probably 6, 7, maybe 10 times” what you can expect to see a film in theaters. The price may sound exorbitant, but it is not much more than a typical Q&A session plus you get to see the movie.
Here is the full list of dates and locations:
March 5th – Radio City Music Hall
March 6th – Wilbur Theater in Boston
March 8th – Harris Theater in Chicago
March 9th – State Theater in Minneapolis
March 10th – Michigan Theater in Ann Arbor
March 11th – Indianapolis, IN
March 12th – Midland Theater, Kansas City
March 14th – Springfield, OH
March 22nd – Paramount Theater, Denver
March 26th – McCalister theater, New Orleans
March 28th – Paramount Theater, Austin
March 29th – Cobb Energy Center, Atlanta
April 4th – McCaw Hall in Seattle
Smith plans to reopen the tour if the initial dates are a success and is confident that he will  pay back the entire $4 million budget of the film by the time it opens in October 2011.See all the details here.
If you think about it, a Broadway play costs the same amount and you can’t ask questions of the actor/director after the show is over. It sounds like a unique way of showing a film and one that is likely to be a success.
Would you be willing to pay $50-100 to see Red State and partake in a Q&A with Smith and Parks?
Source: /Film