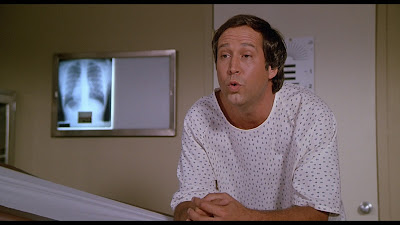 Get ready for a Fletch reboot!

Warner Bros. has purchased the rights to the Fletch book series written by Gregory McDonald. The series has previously been adapted into two hilarious film that starred Chevy Chase. The first Fletch film is by far the best in my opinion, but both are very funny. I do not see a need for a reboot, but that is what the studio has planned.

As of now, there’s no writer, director or actor attached to the project. Warner Bros. is hoping to bring audiences a smart action comedy “that plays out on a bigger canvas than the previous movies.” This marks the second time a studio has tried to do a Fletch reboot. Harvey Weinstein tried to get one going with Kevin Smith attached to direct. At the time Ben Affleck, Jason Lee, and Joshua Jackson were possibilities to star in the film.
It will be interesting to see how this movie develops. Chase was so awesome in the role, it will be difficult to find someone that can properly fill his shoes. I think that Ryan Reynolds or John Krasinski might bee good choices for the part.
What are your thoughts on this reboot? Who do you think would make a great Fletch?
Below is a description of the first book the film’s based on:
In the first novel, Fletch is working as a reporter. Over the course of the series, however, he acquires a moderate fortune and becomes a globetrotter perpetually working on a biography of fictional artist Edgar Arthur Tharp, Jr. He tends to stumble upon mysteries, often to be suspected of crimes by the police, and to win through depending heavily on his wits.
The first Fletch novel (1974) introduces I. M. Fletcher, a journalist staying on a beach watching the drug culture for a story, waiting to find the dealer’s source before publishing an expose.
A millionaire businessman named Alan Stanwyk approaches Fletch to hire Fletch to murder him; the man tells Fletch that he is dying of bone cancer and wants to avoid a slow, painful death. Fletch accepts $1000 in cash to listen to the man’s proposition; the man offers him $20,000 for the murder, and Fletch talks him up to $50,000 in an effort to see if the man is serious. He appears to be serious, and Fletch begins investigating the man’s story in between investigating the drug story on the beach and avoiding the two attorneys after him for alimony for each of his ex-wives.
Source: Deadline