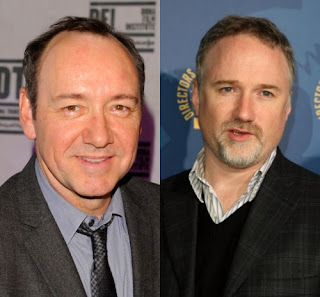 Kevin Spacey will star and executive produce David Fincher’s new drama series House of Cards for MRC. Fincher (THE SOCIAL NETWORK) is executive producing the project, based on the book and British miniseries of the same name.

The news gets even better, Fincher will make his TV directorial debut helming the pilot episode of the series. Eric Roth, (writer of Fincher’s THE CURIOUS CASE OF BENJAMIN BUTTON), Joshua Donen and Trigger Street Prods. Dana Brunetti are serving as executive producers on the project.

Michael Dobbs, former Conservative Party chief of staff, wrote the political-thriller novel that’s set at the end of Margaret Thatcher’s tenure as prime minister and follows “a British politician with his eye on the top job.” The BBC adapted the novel into a miniseries written by Andrew Davies and starring Ian Richardson in 1990. Richardson won a BAFTA and Davies won an Emmy. This new adaptation is set in the U.S. and was written by playwright/screenwriter Beau Willimon (THE IDES OF MARCH).

This new series has not been taken to any TV networks yet, but with the star power attached it will surely be picked up. I am loving the idea of Spacey and Fincher working together. They last worked together on SEVEN. I am interested in learning more about this project.

What are your thoughts?