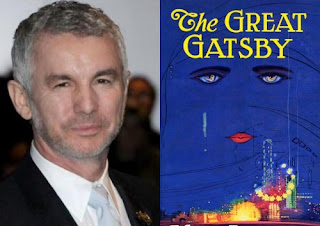 So, you have probably heard by now that there’s a Baz Luhrmann version of THE GREAT GATSBY is in the works.  Did you also hear that it’s going to be made in Australia?  Yeah, that’s right.  I said Australia! Now some of you might be thinking, “What the heck man?  That’s down right un-American!”  I know I felt the same way too!  I was like, “How dare he take The Great American Novel down under?”   Then, I started to do some research.


Baz Luhrmann is an Aussie director and producer of films like William Shakespeare’s Romeo + Juliet, Moulin Rouge!, and Australia.  If you’ve ever watched any of these films you’d know that they are all visually stunning.    He creates spectacular sets and loads his films with amazing actors.  I don’t know about you but, Australia put me on an emotional roller coaster.

Alright, Baz is super qualified for the job but, why should The Great Gatsby be filmed in Australia as opposed to the U.S.A.?  According to Linda Silmalis, political writer for the Sunday Telegraph, “The production will provide a much-needed boost to the struggling local film industry.” Australian Premier Kristina Keneally said, “The deal would inject more than $120 million into the NSW economy.”

So, we could use an economic boosts here in the U.S.!  What’s the real reason they’ve chosen Australia?  According to the New Zealand Herald, “The film has been secured under the NSW government’s enhanced film investment fund.  The NSW budget included an extra $25 million for the NSW screen industry – including $20 million to attract large-scale productions such as The Great Gatsby and $5 million extra for Screen NSW’s Production Investment Fund.”  So basically, their government is kicking in big money to attract big movies, making it more appealing for studios to film there.
We cannot complain about how Australia has decided to stimulate their economy. It’s not like we are prime examples of economic success here. We also can’t complain about not filming in authentic locations either.  Heck, the 1974 version of The Great Gatsby starring Robert Redford was filmed various locations.  Newport, Rhode Island, Buckinghamshire, England, Windsor Great Park, UK., New York City, and Uxbridge, Massachusetts.

With today’s modern technology, re-creating famous New York and Long Island landmarks from the 1920s can be done just about anywhere.  Baz’s unique style of movie making, combined with three dimensional enhancement, will feed the viewer eye candy sweeter than that of James Cameron’s TITANIC.  (Don’t let me down Baz…that’s a pretty bold statement.)