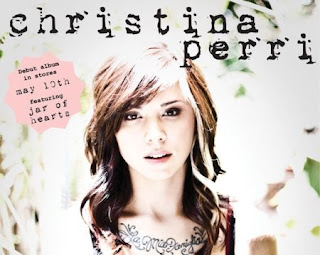 Christina Perri has finished recording her debut full-length album – lovestrong,  which is set for release May 10 on Atlantic Records. Here debut single “Jar Of Hearts” is Certified Platinum, Top 5 at Hot AC and Top 20 at CHR. The new single, “Arms” is set for release March 15. Keep reading below for the full details on the album release!

Here is the official press release:

New York, NY – Christina Perri exits Sunset Sound Studio in Hollywood, CA, ready to take the world by storm with her debut album lovestrong. – due out May 10th on Atlantic Records. Ms. Perri spent the last month plus locked away at the famous studio with producer Joe Chiccarelli (White Stripes, Tori Amos, The Shins) working on the eleven songs that will be featured on lovestrong. – including her already platinum-selling single “Jar Of Hearts.” The album was mixed by Michael Brauer (Coldplay, Regina Spektor).

The last eight months have been a whirlwind for this 24-year-old girl from Bensalem, PA who moved to LA three years ago with a suitcase, a guitar and a dream. Her life changed with “Jar Of Hearts” – a song that has been unstoppable since it was first heard on So You Think You Can Dance last June and has since climbed to the Top 5 on the Hot AC chart and Top 20 on the Top 40 chart. Christina’s next single, “Arms” will be released March 15th to all digital retailers.

“Jar Of Hearts” has catapulted Christina Perri far from barista to pop star in under one year. She’s shared the stage with one of her idols (Jason Mraz), she’s performed her single on the Tonight Show with Jay Leno as well as Conan, and she’s received accolades from some of music’s most prestigious outlets including Rolling Stone, Entertainment Weekly and Billboard.

Christina hits the road with James Blunt starting in April and rolls into her May 10th album release with a platinum single under her belt. For more information on what Christina is up to, please check out www.christinaperri.com or follow her on Twitter @christinaperri.