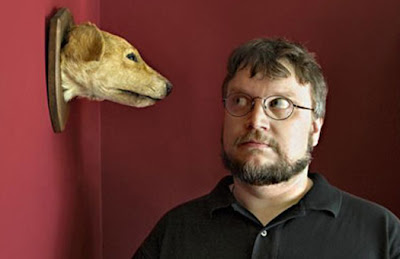 The New Yorker printed an amazing article about Guillermo del Toro that is a must-read for any fan.
The article gives us a glimpse of who del Toro is, and how he got into the horror genre. It also talks about many of his past and future films. He gives a description on his vision for Frankenstein and also goes into detail about his vision for Smaug in The Hobbit which he dropped out of. There’s tons of information in this article, below are a few key points.

He made a short film about a toilet monster in high school that sounds really cool:

In high school, he made a short about a monster that crawls out of a toilet and, finding humans repugnant, scuttles back to the sewers. He loved working on special effects, and his experiments with makeup grew outlandish.

He published a book-length essay on Alfred Hitchcock.

Discussing The Birds, del Toro notes that “in the terror genre, an artist, unbound by ‘reality,’ can create his purest reflection of the world—the cinematic equivalent of poetry.

He talks about At the Mountains of Madness and how it will be his most complex film to date. He goes on to explain his creature idea, which are very ambitious and mind boggling.

Here’s his description of the abandoned coaral reef in the Mountains of Madness story.

A coral reef is a shitload of skeletons fused together, right? All the technology those creatures have, all their technology is organic. You and I use metals, plastics. These creatures don’t have weapons or chisels. They create other creatures as tools.

Here is his description of The Old Ones from the book, which he describes as monsters that will open up like a “Swiss Army Knife” with wings and tentacles.

The oceanic motif was particularly evident in the design of the Old Ones. Del Toro’s enthusiasm for the lionfish had endured, and the aliens’ wings echoed their flamboyant fins. In motion, he explained, the Old Ones would appear buoyant-“unbound by gravity.” As the camera tracked them caroming around the city, the viewer would feel disoriented, like a panicked scuba diver inside a cave.

Since the Shoggoths could mutate into anything, there was no fixed silhouette, but many would feature a “protoplasmic bowl,” an abdomen-like area from which new forms could sprout. One maquette was a disorienting twist on classic Lovecraftian form. It looked like a giant octopus head with tentacles jutting from the top and the bottom-a fearful symmetry. “That’s my belly in the middle,” del Toro joked. In another maquette, the Shoggoth had sprouted two heads, each extending from brontosaurus-like necks. Their skulls could be smashed together to destroy victims. “The idea is to create craniums that function as jaws,” he said. The Shoggoths would often create ghastly parodies of human forms; as they pursued the humans, they would imitate them, imperfectly.

Then he gives a detailed description of what he was planning for the dragon Smaug in The Hobbit. Not sure if Peter Jackson will still end up using these designs or not. It would be crazy if Jackson didn’t.

I paused at what looked like an image of a double-bitted medieval hatchet. “That’s Smaug,” del Toro said. It was an overhead view: “See, he’s like a flying axe.” Del Toro thinks that monsters should appear transformed when viewed from a fresh angle, lest the audience lose a sense of awe. Defining silhouettes is the first step in good monster design, he said. “Then you start playing with movement. The next element of design is color. And then finally-finally-comes detail. A lot of people go the other way, and just pile up a lot of detail.

I turned to a lateral image of the dragon. Smaug’s body, as del Toro had imagined it, was unusually long and thin. The bones of its wings were articulated on the dorsal side, giving the creature a slithery softness across its belly. “It’s a little bit more like a snake,” he said. I thought of his big Russian painting. Del Toro had written that the beast would alight “like a water bird.”

Smaug’s front legs looked disproportionately small, like those of a T. rex. This would allow the dragon to assume a different aspect in closeup: the camera could capture “hand” gestures and facial expressions in one tight frame, avoiding the quivery distractions of wings and tail. (Smaug is a voluble, manipulative dragon; Tolkien describes him as having “an overwhelming personality.”) Smaug’s eyes, del Toro added, were “going to be sculpturally very hidden.” This would create a sense of drama when the thieving Bilbo stirs the beast from slumber.

Del Toro wanted to be creative with the wing placement. “Dragon design can be broken into essentially two species,” he explained at one point. Most had wings attached to the forelimbs. “The only other variation is the anatomically incorrect variation of the six-appendage creature”-four legs, like a horse, with two additional winged arms. “But there’s no large creature on earth that has six appendages!” He had become frustrated while sketching dragons that followed these schemes. The journal had a discarded prototype. “Now, that’s a dragon you’ve seen before,” he said. “I just added these samurai legs. That doesn’t work for me.

Del Toro moved his family to America after his father was kidnapped. His father was finally released after 72 days and 2 ransoms.

“I highly recommend you save your father’s life. You don’t see yourself as somebody’s child anymore. You become a man saving another man.” He claimed that the experience had ended his “perpetual puberty.”

Here’s a description of what his Frankenstein monster will look like, which will be played by Doug Jones:

In accordance with Mary Shelley’s description, the head appeared to have been stolen from a cadaver: there was exposed sinew around the jaw, and the cheekbones looked ready to poke through the scrim of flesh. Most appallingly, the Creature lacked a nose; a single bridge bone protruded over an oval breathing hole. Torres had been etching deep furrows into the Creature’s forehead, and shaved bits of clay were scattered on his desk, like clippings on a barbershop floor.

The Creature’s face was inspired, in part, by the graphic artist Bernie Wrightson, who, in 1983, published a stunning illustrated edition of “Frankenstein.” Four panels from the book hung in del Toro’s study at Bleak House. Wrightson’s Creature has been rudely cobbled together from several corpses, but he also has a lithe, sensual grace. It’s Michelangelo’s David, if Goliath had won.

Finally, here is a bit about what drives Del Toro to make the movies he makes,

“I don’t see myself ever doing a ‘normal’ movie,” del Toro said. “I love the creation of these things—I love the sculpting, I love the coloring. Half the joy is fabricating the world, the creatures.”

Check out the full New Yorker interview, it is a great read.