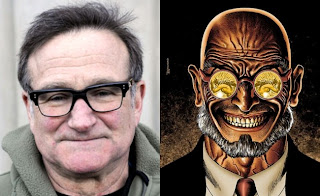 A rumor has begun circulating that Robin Williams is in the running to play Hugo Strange in Christopher Nolan‘s The Dark Knight Rises!?

According to Batman-News who reported on a post made by BATMAN-ON-FILM‘s Jett. Read what they said below:

The tweet above from BOF’s Jett peaked my interest this morning. Jett has mentioned Robin Williams before on his BOF message board and Facebook page… could he be onto something? The last time Jett dropped hints about possible The Dark Knight Rises villains was when he kept mentioning Bane on his message board, and we know how that turned out.

Robin Williams was close to playing both The Joker and Riddler before Christopher Nolan took over the franchise back in 2005. In the past Williams has mentioned that he’d like a role in the lastest series of movies. At one point it was thought that Tom Hardy would play Hugo Strange so the character is seems to be linked to The Dark Knight Rises.

Warner Bros have not announced specific casting news along with Tom Hardy and Anne Hathaway? Be sure to share your thoughts on this rumor below.


The Dark Knight Rises will be released in theaters on July 20, 2012.
Source: CBM