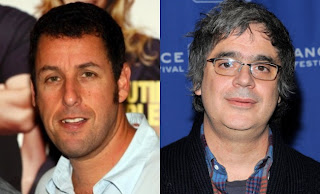 Adam Sandler may be set to star in a project titled Fat Man for director Miguel Arteta (director of Cedar Rapids) that centers on an 800lbs. fat man who has a love affair with his nurse.

Arteta was interviewed at Sundance by FirstShowing. Here is what he had to say about Fat Man:

“I’d love to do a movie with Adam Sandler that… someone said he was flirting with? It’s called Fat Man. I don’t know if you’ve heard about this? One of the main writers of The Simpsons wrote the script and it’s amazing. He would play an 800lbs. guy who has a love affair between him and his nurse. And he’s naked for the first half of the film… and it’s very touching… and it’s very funny.

So, I hope he gets the gumption to do it, and maybe I get a crack at that, that would be amazing. Certainly, it would be not a movie you would forget anytime soon… and [it’s]beautifully written. I don’t know if that’s meant to get out on the internet…”

An old Variety article from 2003 talks about the project. The film would be based on a spec script purchased by Adam Sandler’s Happy Madison Productions written by The Simpsons’ Mike Reiss.
Here is a plot synopsis:
“a spec script by Mike Reiss about an 800-pound man who drops 600 pounds with the help of a nurse he finds more appealing than a Happy Meal.”
It looks as this project is gaining traction again after 7 years. I can see Sandler in this role, but I having trouble seeing the film as touching and beautifully written? I would love to see Sandler do more films likePunch Drunk Love that are against type.
What are your thoughts on this news?