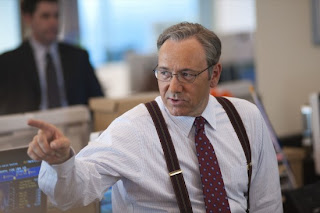 Margin Call has been picked up by Lionsgate and Roadside Attractions before it’s premiere at the Sundance Film Festival!

Today it was announced by Steve Beeks of Lionsgate and Howard Cohen of Roadside Attractions that they have teamed to acquire and release J.C. Chandor‘s thriller, Margin Call for a 2011 release.

The deal came together after an all night negotiation between Cassian Elwes and Rena Ronson of UTA on behalf of Margin Call producers. The film will have it’s world premiere on Tuesday night at the Eccles Theater, and a 2011 theatrical release is planned.

Here’s the official synopsis from Sundance:

Set in the high-stakes world of the financial industry, Margin Call is a thriller entangling the key players at an investment firm during one perilous 24-hour period in the early stages of the 2008 financial crisis. When entry-level analyst Peter Sullivan (Zachary Quinto) unlocks information that could prove to be the downfall of the firm, a roller-coaster ride ensues as decisions both financial and moral catapult the lives of all involved to the brink of disaster. Expanding the parameters of genre, Margin Call is a riveting examination of the human components of a subject too often relegated to partisan issues of black and white.

This is one movie I am really looking forward to seeing in theaters. The cast is amazing and it looks as though it was beautifully shot from the stills I have seen. Check out the stills from Margin Call HERE.