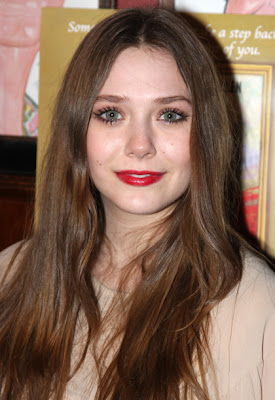 Elizabeth Olsen is getting some great reviews for her performance in Martha Marcy May Marlene and now she has her next starring role lined up in Rodrigo Cortes’ (Buried) new film Red Lights.

Olsen has both Martha Marcy May and Silent House playing at Sundance this year. She sure knows how to pick her projects, her new film has an amazing cast that includes Robert De Niro, Sigourney Weaver and Cillian Murphy. The film is described as a “thriller about paranormal activity.”
Here is what Olsen had to say,

“Robert plays a world renowned psychic and Sigourney is a psychology professor, and I play her student. Cillian Murphy is my love interest, though that’s not a huge part of the story.”

Olsen is a psychology junkie and is currently studying psychology at New York University. Red Lights is currently in pre-production and is being produced by Versus Entertainment, which also produced Buried. She will have to take a break from school again when film begins shooting. Olsen added,

“I’m so lucky that school is always there for me when I take these little breaks. But my education is always a priority.”

Be sure to stay up to date on everything happening at Sundance this year by checking out GeekTyrant coverage of the fest HERE.
What are your thoughts on this news?