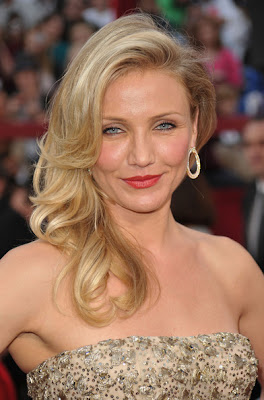 Cameron Diaz has been cast to star alongside Colin Firth in the remake of Gambit!
I love the Coen Brothers, I love Colin Firth and up until now I’ve been interested in the Gambit remake the directors have in the works. That was until today, when Deadline announced that Diaz was going to star in the remake. That is simply a casting decision I just don’t understand for the fact that Diaz is a pretty terrible actress. It makes no sense to me how she continues to land roles in films. At least she will have Colin Firth in the film to balance her craptastic performance.
The only reason I suspect that this happened is because the Coen Bros. only wrote the script for the film. This remake is actually being directed by The Last Station’s Michael Hoffman, and it’s not known how involved the Coen’s actually are. Diaz recently appeared in The Green Hornet and just wrapped the comedy, Bad Teacher.
The 1966 original starred Michael Caine and Shirley MacLaine. The story follows a cat burglar (Firth) who attempts to rob a billionaire of his priceless statue. He enlists the help of a waitress (Diaz) who looks exactly like the victim’s dead wife. The burglar’s usual precision is clouded by his relationship with his accomplice.
Despite the casting of Diaz I am still interested in seeing this film because the Coen’s and Firth.
What do you think about Diaz being cast in Gambit?