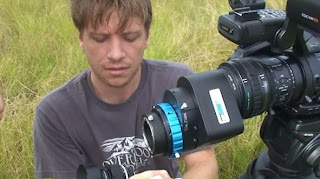 Gareth Edwards shared some depressing news abour plans for a Monsters sequel without him involved. It looks like Vertigo Films – the production company who owns the rights to the film – is considering a seuqel without him!?
Edwards spoke to Dread Central, where he reveleaed:

“Vertigo owns the rights to MONSTERS, and I know they’re keen to move forward with another MONSTERS-related project very soon. I’m not sure how involved I can be right now, and I don’t think my next film really should be a sequel just yet. I’d like to do something else first, but I would definitely be open to returning at some point.”

He goes on to say:

“But I do think whoever Vertigo ends up hiring will do a great job because they really know what they’re doing there. For me, if they hire someone to direct another MONSTERS movie, the last thing they need is for me to be hanging around, telling people how the movie should be. Whoever comes in should definitely be given free rein to put their own spin on this world, and I know they’ll get the right person,”

As you know, Edwards’ next film is the redux to Godzilla. Despite the craptastic Roland Emmerich film I am very optimistic about the film. Here’s what he had to say about Godzilla:

“It’s really too early to talk a lot about GODZILLA, but I am very confident in Legendary Pictures’ belief that we need to make the best film we possibly can,” said Edwards. “This will definitely have a very different feel than the most recent US film, and our biggest concern is making sure we get it right for the fans because we know their concerns. It must be brilliant in every category because I’m a fan as well.”