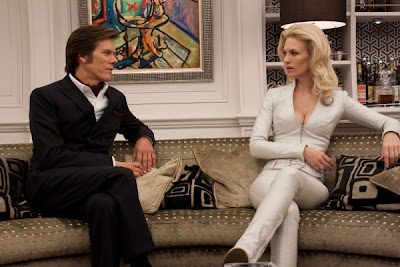 The pictures give us our first look at Kevin Bacon as Sebastian Shaw, one of the main villains in the film aside from Magneto. The picture also shows January Jones as Emma Frost. There’s also another group picture of the X-Men team out of costume below. 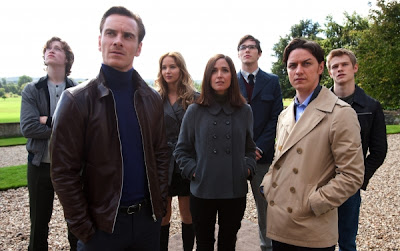 I love the costuming and production value of the film. The LA Times spoke with Vaughn and he revealed some interesting info about the film. Apparently, the film is being rushed through production though, which can only lead to danger for the end product. Here’s what Vaughn had to say,

We’re filming at the moment, we’ve a lot to get done. I’m at that stage where I feel like a boxer against the ropes. I’m just throwing punches and taking them as they come and making sure I don’t hit the canvas… I’ve never worked under such time pressure. The good thing about the independent world is I never even knew if I was going to get distribution. I’m used to finishing a film and then crossing your fingers that someone is going to like it. This is totally doing it the other way around. We’ve definitely got a release date and we’ve got to make it.