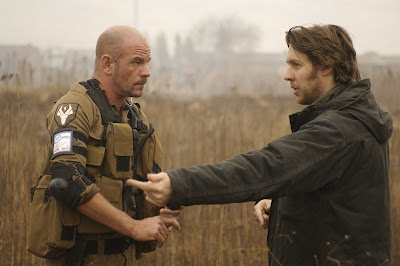 Development of Neill Blomkamp‘s Elsyium is undeway. The director has been meeting with studios to discuss his new futuristic science fiction next film.

Elsyium stars Matt Damon, Jodie Foster and Sharlto Copley. It is poised to be a big film and is set 100 years in the future and will have a Blade Runner feel. It will have all sorts of cool gadgetry and technological advances you would expect form that time period. It also features some social commentary much like District 9 does.
Blomkamp, MRC’s Modi Wiczyk and Simon Kinberg (one of the films producers along with Bill Block) held a number of studio meetings with key decision maker’s, The meetings have consisted of a review of the script, followed by a  storyboarded presentation by Blomkamp. The trio have met with exacs at each studio except Disney, which won’t make R-rated films.
They will be able to create the Blade Runner type fell thanks to Syd Mead who worked on that film and others like it. Mead does not take on much work these days, but he loved District 9 so he agreed to take the job. Preparations willl begin in April with production starting in July in Vancouver before moving to Mexico City in the fall.
I wouldn’t be surprised if this film gets snatched up immediately. It is going to be as big of a tentpole films and Inception was. The film will be delivered in time for release just in time for the holidays in 2012. I loved District 9 and can’t wait to see Elsyium or any other film he works on for that matter. The cast is great and with Syd Mead on board for produciton this film is going to be simply amazing.
What are your thoughts on this news?