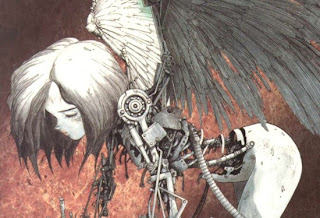 Will James Cameron direct Battle Angel and if so when?

Battle Angel which follows a cyborg who is found and repaired by a scientist has been on James Cameron’s slate for awhile. The good news for fans of the material is that Cameron wants to make the film, the question is when.

He has signed on for two sequels to Avatar, which will likely be shot back to back. This will mean that Cameron will be busy for the next few years. The question on everyone’s mind until now was if he’d give it up to another director, or is this a film that Cameron wants to direct himself? It looks as though he is indeed interested in directing the film for now.
Collider spoke to Cameron during press for Sanctum and was able to ask a couple questions about the film, which were met with very brief answers. They asked which which parts of the the manga he might adapt Cameron said,

I’m obviously going to be pretty busy for the next five years [with Avatar 2 and 3]. And so I had to consider, do I hand this project off to another director? And then I thought, ‘No, I love it too much.’…It’s such a rich world. What I’m going to do is take the spine story and use elements from the first four books. So, the Motorball from books three and four, and parts of the story of one and two will all be in the movie.

So there you have it, albeit brief, he is still intent on directing Battle Angel. What are your thoughts of this news?