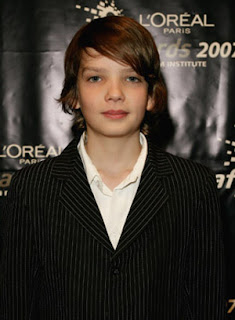 Kodi Smit-McPhee has joined the cast of The Congress!
The film is from director Ari Folman (Waltz With Bashir) who plans a mix of live-action and animation for the loosely based adaptation of the story, ‘The Futurological Congress‘, by author Stanislaw Lem.

Robin Wright will star as a struggling actress whose image has been bought and co-opted, causing her to be outmoded and unnecessary. The film will begin as live-action and then switch to animation with Robin Wright’s character seen in what appears to be a dystopian future of sorts, where manufactured pharmaceuticals are a way of life. Not much else about the story is known at this time.
Kodi Smit-McPhee (The Road, Let Me In) will star along with Wright in the film. Danny Huston, Paul Giamatti and Harvey Keitel are attached to star as well.
Here is what Smit-McPhee said in an interview with WeGotThisCovered,

I’m also doing a film called The Congress which is just in the rehearsal process and I think next week we’ll be shooting. I don’t really know how to explain it, I think it’s sci-fi and futuristic.

The film’s official Facebook page confirms Huston, Giamatti and Keitel are attached and gives this synopsis:

An aging, out of work actress struggles to make ends meet and provide care for her disabled son. Times are tough until she is offered one last job. A major studio will scan her body – they will own her image and likeness and use it anyway they want. It’s a huge paycheck, but there’s a catch: she’ll never be able to act again. The ramifications of her decision have far-reaching effects in the future that she could never imagine.

The specific roles of the cast are not known currently, bu it’s likely that Kodi Smit-McPhee could play the son of Robin Wright’s character.
Check out a clip below to get a feel for what the movie may look like and share your thoughts!

Where Will Mobile Payment Processing Help You Most this Holiday?