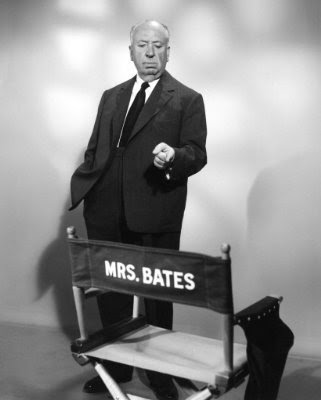 Get ready for an Alfred Hitchcock biopic!
Sacha Gervasi the man behind the 2009 documentary Anvil! The Story of Anvil is currently in discussions write and direct the film.
According to the LA Times the movie will be “based on a chapter in the career of Sir Alfred. According to two insiders who’ve been briefed on the plans, executives at Ivan Reitman’s Montecito Pictures are in discussions with Gervasi to take the reins of Alfred Hitchcock and the Making of ‘Psycho,’ a long-gestating film based on Stephen Rebello’s 20-year-old book about, well, just what the title says.”
This sounds like a great idea for a film. The LA Times talks about how the “1960 hit Psycho was a departure for the North by Northwest director, a more explicitly shocking film that was meant to compete with other low-budget horror pictures — The Blair Witch Project of its day.”
Hitchcock is my favorite director and both Rear Window and North By Northwest are on my list of favorite films of all time. He is definitely someone that deserves their own biopic.
What are your thoughts on the news?
Here’s the description of the book:
Stephen Rebello’s groundbreaking book offers the complete inside story on the making of Alfred Hitchcock’s original Psycho, now seen as the forerunner of all modern horror thrillers. Rebello takes us behind the scenes for every step in the creation of this cinematic masterpiece-from the story’s original inspiration to the controversy surrounding the creation of the famous shower scene. Drawing on new in-depth interviews as well as Hitchcock’s private files,Alfred Hitchcock and the Making of Psycho is an eye-opening portrait of the artist at work.