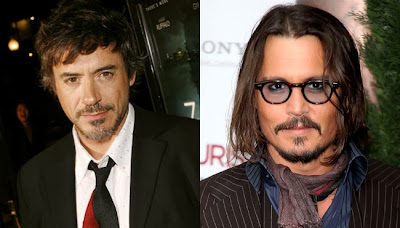 RDJ was to play the lead role of the Wizard, but now it looks like Johnny Depp will be stepping into the role. According to THR he’s currently in talks with Disney to close a deal.

The official reason for RDJ’s departure at this time. If Depp ends up officially taking the role it will push the production of Gore Verbinski’s The Lone Ranger back a bit. Depp and Disney have a very good working relationship and I am certain a deal will be announced soon. This is actually much better news that RDJ as the Wizard. Depp has the ability to really immerse himself into each of his roles.
The story focus’ on a younger Wizard, and his background story of how he got to Oz and became the great and powerful wizard. Here’s a more detailed look at the story that was leaked last year.

The would have the Wizard — a snake-oil salesman posing as a magician — enter Oz via a hot-air balloon, which he uses to escape an angry husband who has found out that Oz slept with his wife. There, Oz — a fast-talking huckster who wears a velveteen frock coat — falls in love with Glinda (the Good Witch), and the two combine forces to Fight the Evil Witches Evanora and Theodora. Theodora starts out as a good witch, but after Oz jilts her sexual advances, Evanora — the truly evil witch — convinces Theodora to become an evil witch with her and help her to rule all of Oz. Both Evanora and Theodora are described as incredibly attractive, seductive women, and Theodora likes to wear black, thigh-high boots.

What are your thoughts on Depp taking on this role?